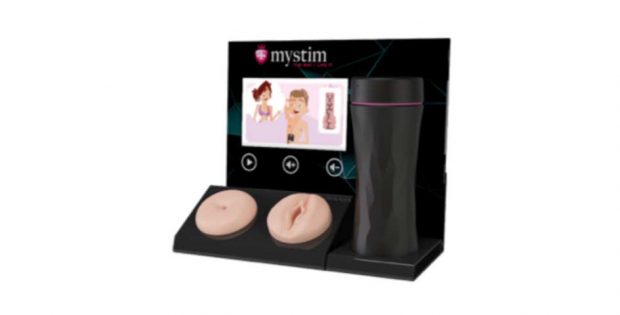 “To come in ecstasy through electrifying impulses” – true to this motto, the new Mystim stand at ANME (Burbank) from 15 – 17 July 2019 was a strong attraction for many trade visitors. A wide range of e-stim toys and massage candles by Mystim attracted the attention of wholesalers and retailers. The highlight of the company this year: The E-Stim masturbator Opus E. A full sized stroker that combines realistic sensations and intensive electrostimulation.

“The Opus E is interesting for men who would like to try a masturbator with that certain extra”, says Christoph Hofmann, CEO and founder of Mystim.

According to the company, the Opus E is a well thought-out product that received positive feedback from the trade audience. The response to the material and the features was consistently outstanding. The new designed e-stim masturbator Opus E captivates with its innovation: combining a masturbator and e-stim in a completely new way. “Intense electrical conductive strips inside the sleeve that send electrical impulses from the root to the tip of the penis”, says Lulu Shwartzer, Mystim’s Sales Manager. “With our Cluster Buster and Sultry Sub Black Edition, you can use the Opus E wirelessly.”

For the Opus E there were a lot of POS materials for interested dealers anyway, like shelftalkers, posters and roll up’s. A real eye-catcher of the POS range was literally the sales display with integrated 7” video screen: See, hear, feel – a display that is intended to appeal to all the senses of the end customer. “Enlightening and funny at the same time,” Hofmann adds.

“Once again, we were able to use ANME optimally to get into conversation with old and new contacts, to answer questions and to do business,” Hofmann said joyfully.

Tags:ANME, Electrosex
Back to Front Page