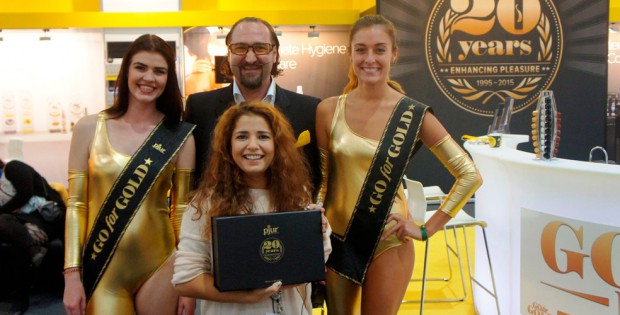 The four new med products pjur med SOFT glide with natural jojoba, pjur med SENSITIVE glide without additives, pjur med VEGAN glide with vegan ingredients and pjur med PRO-LONG Serum impressed the visitors of eroFame. “With our new formulas for health-conscious target groups, we have hit the mark once again. After extensive market observation and consultation with our customers, we decided to expand the successful pjur med series. This year’s fair confirmed that this was the right decision,” said Alexander Giebel, founder and CEO of the pjur group.

In addition, visitors were able to get better acquainted with the two new pjur products We-Vibe Lube – made by pjur and We-Vibe Cleaner – made by pjur. Both innovations were developed specially for We-Vibe and have special packaging designed to appeal to We-Vibe customers. The products were also tested by a leading German laboratory for their compatibility with We-Vibe toys. This co-branding partnership was met with great enthusiasm among trade fair attendees.
The company also struck gold with its Go for Gold campaign, the final phase of which began at eroFame 2015. pjur celebrates 20 years of premium quality Made in Germany this year. To mark the occasion, they are giving away a total of 20 gold bars of a value of 700 euro each from January until December, as well as organizing pjur Oktoberfest parties for b2b contacts. “The campaign has gained international attention and we were able to make a lot of people happy this year. After eroFame, two more raffles will take place in Europe, America and Australia, in which everyone has another chance to win”, explains Alexander Giebel. There were two more lucky winners at the eroFame event itself: Stefan Brandenburger from RH Smith & Sons and Huda Lutz from Mediatainment celebrated winning 20 grams of gold: “I’m overwhelmed, many thanks to pjur for this great prize,” exclaimed Huda.

Tags:eroFame, Lube
Back to Front Page