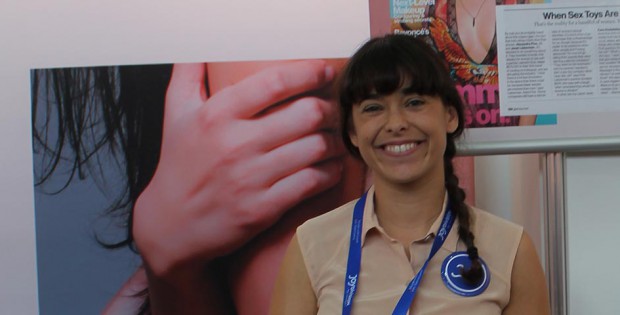 Congratulations on your second successful crowdfunding campaign. Fin surpassed its goal within just 24 hours. What convinced your backers to support your newest products?
Alexandra Fine: Fin zoomed past its goal for a few good reasons. First, we’re starting to change how people think about this product category. Sex toys are coming out of the shadows and starting to appear in all sorts of retail and digital storefronts. Crowdfunding sites are no exception. As taboos dissipate and consumer knowledge increases, people are starting to understand the value that sex toys can bring to their lives.

Second, people recognise that Fin was designed to provide an intimate experience. When it comes to sex, everyone’s bodies and preferences are so different. Instead of selling a standardised ideal, we like to focus on how we can add to or enable the sexual experiences that people already enjoy. People appreciate the adaptability and seamlessness that Fin has to offer, and see how it can fit into their play.

Could you tell us a bit more about Fin? Which features does the product have and what makes it different from other external vibrators on the market right now?
Unlike most vibrators, Fin is worn between the fingers, emphasising agility and ease of use. Exceptionally versatile, the vibrator features a removable tether, and fits both women’s and men’s hands. It can be worn at the tips of the fingers, the base of the palm or even on the backside of the fingers. This allows the wearer’s fingers to have direct contact with their partner (or themselves) with an added boost of vibration. Fin is made from medical-grade silicone and has a powerful, compact three-speed motor, giving it the same level of safety and quality that people have come to expect from Dame Products.

Which technical aspects make Fin special? For example, does it have different vibrations modes?
We gave Fin a single button with three speeds. This makes Fin very easy to use. In four quick presses, you get Low, Medium, High, and then off, just like that. This simplicity is very important to us. One of the chief complaints people have about their vibrators is how needlessly complicated the controls can be. We think this makes Fin very special indeed! You’d be surprised how relieved some people were to discover how easy it is to use.

We used a range of 3D printing technology for rapid-prototyping — which means that we could create prototypes, test them out, and make quick adjustments in-house, ensuring our product was continuing to evolve as we continued to get feedback.

The concept of a finger vibrator isn’t new. What are the existing products lacking, and how will Fin do better in that regard?
We paid special attention to the minutia of Fin’s shape — down to the angles at which the edges curve — in order to make it fit between the fingers as naturally as possible. We wanted users to be able to bend their fingers and put it on in a jiffy. Getting the ergonomics right took a good deal of testing and prototyping, so it meant a lot of research on our end. Thankfully, it’s a lot easier to get anatomical information about hand sizes than it was to get info on vulvas!

Fin is the first sex toy to be allowed on the crowdfunding platform Kickstarter. Why did they present your product on their platform and what makes Kickstarter the better channel for your product?
They recognised that our commitment to forward-thinking design and high standards made our project as valid as any other hardware creator’s. We had a meeting, discussed the specifics of what this campaign would entail, and here we are.

We loved our time with Indiegogo. They were remarkably supportive and wonderful partners. We wouldn’t be where we are today without them. That said, we need to feel more comfortable talking about sex and pleasure as a society. It’s a crucial element to gender and sex equality, and that means breaking down barriers. Kickstarter is an industry leader, an incredibly impactful platform frequented by individuals across the world, and working with them allows us to reach new audiences in a way we haven’t been able to before. Plus, it helps legitimise our industry and what we are doing.

Next, we make sure that our brand and messaging is reaching people, and giving them the right impression. Do people understand the opportunity that Fin offers them? Are we making people feel inadequate, or are we presenting them with something exciting that can make what they already enjoy even better? We try to come off as comfortable, competent, and fun, so that users can feel the same way about themselves.

On top of that, we make sure that people understand who we are, and why it is that we’re doing what we do. The origins of our company really resonate with people. I think it gives folks hope to hear about a sex toy company founded by two smart, compassionate women — it gets a lot of press. We like to think it’s well-deserved!

In terms of the culture, we’re engaging a new audience. People young and old are discovering sex toys for themselves, and understanding that they’re not shamefully, or goofy novelties anymore. This sort of Sex Toy Renaissance has led to some exciting leaps forward for the industry.

With that being said, there is still lots of room for improvement. I think we are at a point (in the US, anyway) where we need digital advertising channels to open up. We need to be able to shine more light on our industry, and that means reaching people. Every barrier that comes down means better consumer literacy, and less room for poor quality.