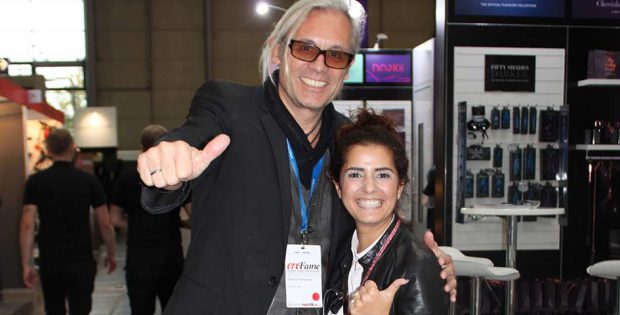 As part of optimizing eroFame, the committee met with organisers of Venus Fair Berlin for confidential exploratory talks last summer, exploring options for simultaneously scheduling both trade shows at the same fairground. In addition, Hamburg was considered as an alternative location.

Before coming to a final conclusion, eroFame’s committee decided on interviewing all current exhibitors and several other regular customers in a widely-arranged campaign. People could vote online or via personal conversations during eroFame 2017. 108 companies voted for the destination in Hanover, 39 companies for Berlin and 21 companies for Hamburg as alternative spots. Spontaneous talks with several visitors of eroFame highlighted a similar tendency.

In the following interview Wieland Hofmeister, organiser of eroFame, comments on this topic in detail.

Mr. Hofmeister, congratulations on a great and successful eroFame 2017 in advance. Before getting into the review of this year’s fair we would like to pay attention to the most currently discussed issue. The location of eroFame has been the subject of debate for years. As a result, the advisory board took the initiative and asked the exhibitors to voice their opinion. What results did your survey yield?

eroFame is funded through stand rents and fees, which means that the exhibitors are basically paying for the show – and the show is expensive. There are no additional proceeds through ticket sales to visitors, so things like that don’t factor into the equation. And we do not intend to cut down on the services our visitors and exhibitors have come to expect from eroFame. We will continue to offer free food and drink and a free party to the participants of eroFame.

You’d be hard-pressed to find a comparable price/value ratio for a trade show of this calibre in any European metropolis – I’d even go so far as to say that you won’t find it anywhere, not without making the whole affair much, much more expensive. The current location of eroFame is top-notch, fitting the concept of the show and meeting the expectations the organisers, the exhibitors, and the visitors have.

As part of the exploratory talks with Venus fair, regarding the idea of arranging both trade shows at the same time and sharing the same fairground in Berlin, we also visited all contemplable locations. The results were – to put it mildly and literally – suboptimal. We would have had to decide on several small hangars, from which some even missed daylight and  others were in a memorably bad shape.

This aspect alone would have been enough for a decision against a fair in Berlin – it is our duty not to take any steps backwards, also not in terms of location.

By the way, there are also many big trade members who support this location for its geographic position; it’s almost exactly in the centre of Germany, which highly accommodates the national retail, and people from the neighbouring, northern European countries can reach it easily by car.

And to point this out once more: Hanover is home to the world’s biggest fairgrounds which, in turn, play host to many big international events – so having the opportunity to have eroFame here is pretty special… this doesn’t mean that we are carving eroFame in Hanover in stone, we are constantly balancing our options in everyone’s interest – also towards Berlin. Not we but our exhibitors and visitors decide on where and how eroFame is taking place. 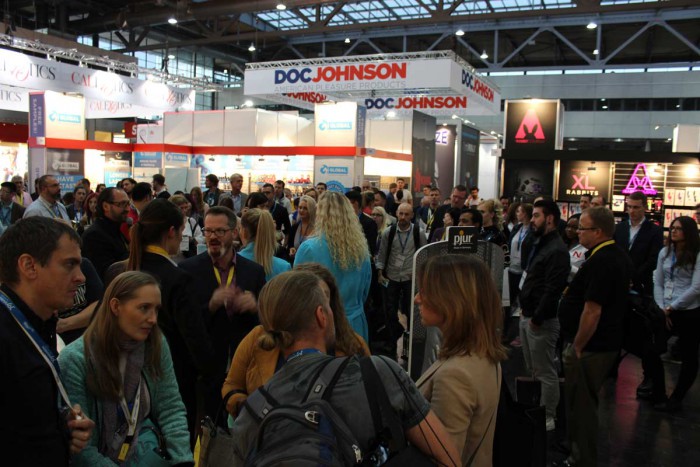 Were you relieved when it became clear that the number of visitors at this year’s show was considerably bigger than at previous eroFames?

Everybody who is keeping an eye on the market knows that the brick and mortar trade is in decline, and as a logical consequence, the retailer community will inevitably become smaller. We were also worried that the Venus show in Berlin might have an impact on the eroFame visitor numbers since both shows took place at the same time this year – which had to do with contractually stipulated dates for eroFame, by the way; it was by no means a political manoeuvre, as some seem to think.

As it turned out, neither of these factors had an impact on eroFame, and yes, we are very happy about the number of visitors this year. And as for the “considerably bigger” audience, that you mention in your question, that may be overdoing it a bit. It is a great thing for our exhibitors that we can still chalk up new visitor records, and it is also great that we can still see slight increases year after year.

So maybe you can understand my confusion and, quite frankly, my irritation when I hear claims that were spread during the show, falsely stating that we had fewer visitors than the previous year. Forgive me if I am being a bit emotional, but this is really frustrating. Of course, we are not a consumer event where thousands upon thousands of people fill the aisles, and the eroFame visitors are spread across a show floor of 15,000 square metres, so it may not look as impressive, but we can say with a clear conscience that eroFame is a well-attended b2b show, arguably even the best-attended event of its kind – worldwide.

Do you have some ‘bare figures’ for us? How many exhibitors were at eroFame? And how many visitors?

With more than 2,800 visitors, we have reached a new record result – a figure which is also backed up by eis.de. They were one of the exhibitors, and they handed out “Satisfyer bags” to the visitors at the entrance, and in all, they shared out roughly 3,300 promotional gifts. On the exhibitor side, we had representatives from about 190 brands at the show, making for a grand total of almost 4,800 people who populated Hall 27 over the course of the show. 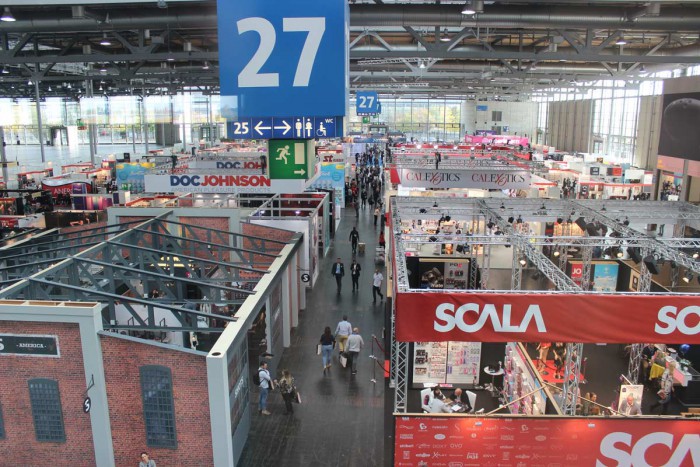 Given the visitor numbers and the many positive comments from the exhibitors, you must clearly consider eroFame 2017 a success, right?

Definitely. I’d like to seize this opportunity to thank everybody involved in eroFame, also on behalf of the whole advisory board and all of my colleagues. Thanks to everyone who helped turn this show into what it is today. Obviously, that goes for both, the exhibitors AND the visitors, who make this show economically viable and give it that unique, positive feel. Our industry is unique – and I think I am speaking for many people when I say that I really enjoy being a part of this special community!

We hope so, but we are aware that future developments in the market can also change the nature and trajectory of a trade fair. eroFame is no exception. We would be ill-advised to idly rest on our laurels. So in the future, we are going to be listening even closer to the voices within our industry, and we are going to try to incorporate them more strongly in our show. To that end, we are going to add an “eroFame task force” to the advisory board, allowing experienced and influential industry members to contribute to, and shape the future of eroFame.

eroFame always reflects the current developments in the market. Which trends did you notice this year?

What were this year’s highlights?

Seeing all the happy, satisfied faces of our exhibitors and visitors. Experiencing the friendliness among the protagonists of our industry. And a personal highlight for me was that our go-to guys from Hannover Messe, the company in charge of the fairgrounds, told us that eroFame is their favourite show! Apparently, we are all remarkably affable and know how to behave… 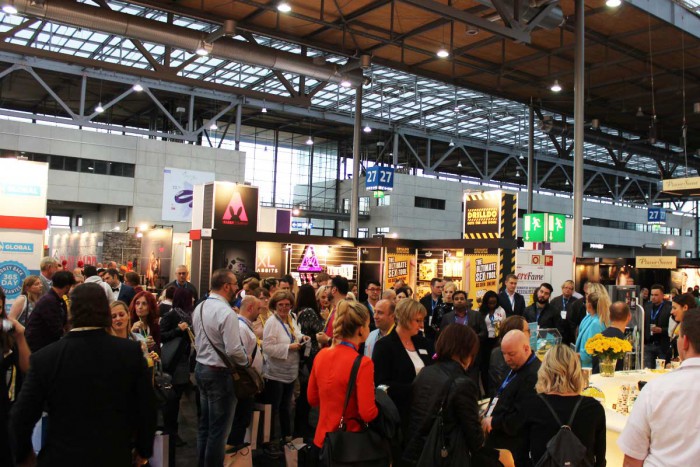 But where there’s light, there’s shadow. One negative has to be having company reps (many from Asia) at the show who present their products without renting a stand, and having visitors whose only goal is to grab as many free products as possible. Are there any steps an organiser can take to counter such things?

You are right, that clearly is a negative thing. It seems we were a bit overwhelmed this year since the measures we implemented were not effective enough – in spite of bag checks, personal requests, and admonitions. Some people behaved in ways we never would have expected, and as a result, we were not prepared for some of the situations that occurred. In the interest of our exhibitors, we will have to put our foot down and put a stop to such activities. I am confident that we will have found an effective remedy by the time the next eroFame comes around.

It is also a fact that companies try to use eroFame as a platform for selling their products without renting a stand (and many of them aren’t from Asia). This is rude and highly unfair to the paying exhibitors, after all, the show wouldn’t even be possible without these exhibitors and their contribution. Companies offering their products at the show without authorization are barred from the premises, it even says so in the house rules, and unfortunately, we were once again forced to expel a handful of people from the premises this year.

What lessons have the show organisers learned this year, and how will these insights shape the trade convention throughout the next few years?

We learned that the organisers and the advisory board need to be even more attentive of the exhibitors’ and visitors’ wishes. We need to be more inclusive. As I mentioned, we have already taken a big step in that direction by adding the eroFame expert panel to the advisory board. I, for one, am convinced that this will be a great improvement for everybody involved. And there is one other lesson we intend to incorporate in upcoming shows: eroFame is a serious, well-ordered business event for professional trade members and producers. But of course, everybody attending this event also wants to have some fun, relax, and let their hair down. That’s what our famous eroFame Oktoberfest is for – but maybe the Oktoberfest alone is not enough anymore to appropriately celebrate the glamour and greatness of our industry. Consequently, we’ll try to step up our game in that regard, so look forward to a few surprises at next year’s eroFame …