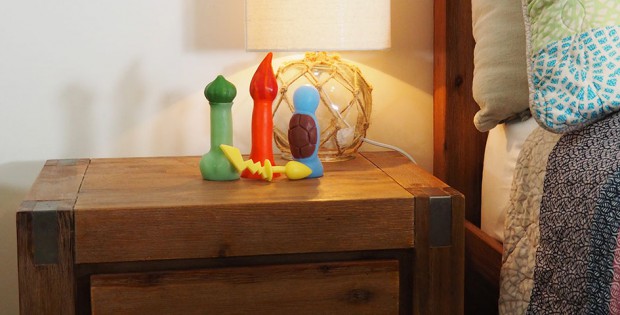 Your company Geeky Sex Toys caused quite a stir recently when you released several Pokemon-themed toys. Were these the first products you brought to the market?
Emma: We had a few other toys out before the Pokémoan toys were released. We were intending on releasing the Pokémoan range a little later down the track but due to the obvious Pokémon craze we decided to create them a little earlier.

How did you come up with the idea of creating sex toys with a nerdy twist?
Josh: Well the quick answer is we couldn’t find any! You can buy every other geeky thing imaginable, except adult toys. So when we looked to buy some for ourselves and realised we couldn’t, we decided to do something about it. Sex toys in general are so boring and bland – with a few funky exceptions – so our other aim was to brighten things up and create a different stigma around adult toys.

Pop- or geek-culture offers a lot of inspiration for sex toys. How do you choose which comic, series, or movie gets a toy?
Emma: That’s our biggest dilemma at the moment. We have so many fun ideas and just don’t have the time to make them all a reality. Usually it’s whatever we are into at the time and is current. We also have a suggestion form on our website and if enough people suggest the same thing we’ll create that.

Imagination plays a huge role when it comes to sexuality. How important is fantasy for somebody who buys a sex toy in general?
Josh: It’s super important! That’s one of the main reasons we started this company. People spend so much time in their fantasy/imagination lands, whether it be watching your favourite TV show or movie, playing video games online, even watching porn. Most of the current toys on the market just take you out of that experience and force you to use 100% imagination. We are helping people to bridge that gap from a fantasy realm into their own personal fantasy experience.

Which of your toys is the most popular?
Josh: At the moment it’s definitely the Pokemoan range. When Game of Thrones was out our Long Shaft sword was very popular. I guess it just depends on what people are into at any given time.

Even though the basic design of your toys is dictated by the movie or comic that inspired the product, creating a functioning toy isn’t easy. Could you give us an insight into your design process?
Josh: Our design process starts at the movie/show or comic like you said. From their it’s a bit of a brainstorm process around what kind of toy would work well with the theme, how it should look etc. Once we have an idea it’s drawn up and then either 3d modelled on the computer or hand sculpted. From there we create a few prototypes for testing and if everything goes well make some more production moulds and we are ready to go.

All your toys are made by hand. Can you tell us a bit about your production process?
Emma: So the production process is similar to how it would be done in a large factory with your regular toys, except on a much smaller scale. In our workshop all the silicone is mixed by hand and then hand poured into a mould. All the handles/hilts are hand finished and painted. When you add a human element into the production processes we think it adds a movie prop type feel to all our toys which is exactly what we are going for.

Do your customers buy your products to actually use them or do they mostly buy them as gifts or because they find them funny?
Emma: We hope people are using them for both. We definitely get asked if we can add some funny messages when we ship, but majority of people are just looking to add something fun and new to their toy collection.

Which topic will you choose for your next range of toys?
Josh: Our next range we are ramping up our Star Wars inspired toys for the release of Rogue One. So keep your eyes peeled for ‘Hand Solo’ ‘R2Dildo’ ‘C3Plug’ and new and improved glow in the dark Laser swords.