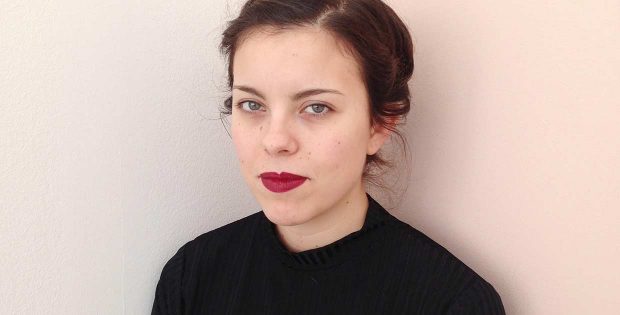 Virtual reality enables us to experience things we normally wouldn’t or couldn’t. The adult industry quickly saw the potential of this technology, and today, there are several companies working to make fully immersive virtual sex a reality. But how far can or should this be taken? Should everything that can be portrayed actually become experienceable? Those are only two of the many questions that designer Marta Giralt addresses with her installation Virtual X, which includes three devices that could theoretically be used to create virtual simulations of rape. In our EAN interview, she explains why she decided to tackle this subject and what discussions we need to have in our society as the possibilities of VR continue to grow.

Marta, you are the creator of an installation called “Virtual X“. Before we talk about your work, could you tell us a bit about your background?
Marta Giralt: After finishing my BA in fashion design in Barcelona, I began working in the fashion industry as a print and accessories designer for womenswear. After two years, I enrolled in the MA Material Futures at Central Saint Martins in London, hoping to push my practice in a more research and materials-lead direction. There I developed an interest for critical and speculative design and developed Virtual X as my second-year graduation project.

Your project Virtual X is asking the question “If current online hardcore pornography were to move into a virtual domain tomorrow, what would be the impact in our society?“ Why did you choose to explore this topic?
In my second year at Material Futures, I discovered virtual reality (VR) and became fascinated by how immersive and interactive it was. As part of my graduation project, I decided to investigate what industries would most likely adopt this technology and I soon stumbled upon the porn industry, which had been one of its early adopters. For my initial research, I investigated the current state of online pornography and I was shocked by how easy it is to access hardcore pornography and, more specifically, by the content and abundance of such pornographic footage. For me, it was an obvious question … if hardcore pornography is currently common in online pornography, then there will also be a place for it in virtual experiences so, what will happen in that case?

Virtual X has three different components, called Suna, Thuom, and Avigan. How do these fit together to create an experience?
Suna, Thuom, and Avigan are the three objects that would allow a user to have a complete rape experience in virtual reality through their three different orifices (considering rape under the UK Sexual Offences Act of 2013, legislation.gov.uk/ukpga/2003/42/part/1/crossheading/rape). I chose this as the project’s scenario as it is one of the most normalised simulated practices in online pornography.

Pornography has been criticised for normalising deviant sexual behaviour and VR pornography is said to have an even stronger effect. What were your findings in this regard?
Although during my research I tried to find conclusive studies that proved that there exists a link between VR and deviant sexual behaviour, there are actually no studies like those at this point in time. VR as we currently know it (with new developments being made by companies like HTC, Oculus or even Playstation) is relatively new and therefore still needs time to be implemented in society and become ubiquitous. Not only that, but developments in robotics and computer-generated imagery still have a long way to go before users can access fully immersive and realistic virtual experiences on a commercial level. Until then, we can only speculate what impact (if any) this might have on the long term.

The argument that new media lead to deviant behaviour in real life is nothing new. Comic books, video games, and even novels have been accused of having an undesirable impact on the user. Now it’s VR. Is it different this time?
I don’t believe so, VR just brings another level of immersion in which most of our senses participate from the experience. With VR we don’t watch something on a screen, but we are actually completely surrounded by the environment and although this does challenge our perceptions of reality, we will always know that it isn’t real. In any case, I think the real problem is that extreme experiences like this in virtual reality might desensitise and detach us from the real situations in life (even more so than watching them on a screen).

You worked together with experts on different fields for this project. Who were the contributors to Virtual X and why did you choose them?
For this project I had a lot of input from experts in different fields related to VR but also in the fields of psychology, robotics and ethics. During the initial phase of my research (where I was studying VR more broadly) I was in contact with Dr. Sylvia Xueni Pan who gave me very important insights regarding studies that are being conducted connecting psychology and VR. Later on, I had input from experts such as Massil Benbouriche from the department of psychology in Wayne State University and Ethan Zuckerman from the Center for Civic Media at MIT regarding the impact of VR in the context of sex and the evolution of pornography through the lense of different technologies.

At which exhibitions will Virtual X be shown this year?
Virtual X has been shown at the Design Does exhibition in Barcelona, Spain and the What If? exhibition at the Museum of Decorative Arts in Trondheim, Norway as part of their biennale.

Will you continue to explore the challenges of technology and sexuality? Are you currently working on further projects?
Yes, I would like to continue exploring the intersection of technology and our sexuality in a more applied and pragmatic way. In a sense, I would like to explore the next phase of Virtual X in terms of its applications in a more therapeutic and medical environment. Currently I am in the early research stages of this next phase.