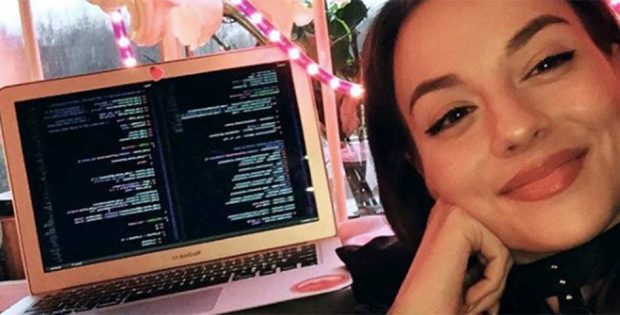 Sex tech is growing. More and more companies, programmers, and tinkerers try their hand at combining sex and new technology. Over the course of the past few years, a fascinating ecosystem has come into existence, with numerous different approaches that are flourishing side by side. Online magazine Sex Tech Space wants to keep you up to date on the latest developments in this burgeoning market, covering everything from the technology used in new products to cyber security to the legal aspects of sex tech. EAN spoke with the mastermind behind Sex Tech Space, Alison Falk, about the future of sex and technology.

Alison, you are the publisher of the bi-monthly magazine Sex Tech Space, which has seen its fourth issue published in April. What kind of publication are we talking about here?
Alison Falk: Sex Tech Space is a free digital publication to help people learn about the different facets of sex tech. It exists to spread awareness on the importance of this industry for a more progressive and inclusive technology community. As a technologist, I believe learning about different subjects in tech makes you a more well-rounded tech professional. As a person, sex tech alone has offered me the tools I need to learn more about myself on all different levels and to find confidence in who I am as an individual. I hope by teaching others about sex tech, they can have similar experiences of growth professionally and individually.

Before we talk more about the magazine, could you tell us a bit about yourself?
I grew up on a farm without internet or a computer. I had never even heard the word STEM until I was in my 20s. My background is actually in brand management and social media. I was at a point where I found myself broke, unemployed and happened to stumble upon the #womenwhocode hashtag. It was there I saw so many individuals transitioning from random jobs like waitressing or acting into tech by taking coding bootcamps. I felt so inspired and motivated by them and decided to use the last of my savings to enrol in a bootcamp too. Within a few months I got a full-time gig as an app developer and began exploring all different areas of technology. After learning about sex tech, I felt like I had found a place in tech where I belonged but couldn’t understand why no one had ever heard of it before. This was the start of how Sex Tech Space came to exist.

Why did you decide to publish Sex Tech Space?
As I previously mentioned, I was really confused when everyone I talked to in tech had never heard of sex tech before at any conference, meetup, or panel. I was curious why this was the case and had discovered that sex tech is something often kept in the shadows. This is harmful because it gives off an odour that innovation in sex tech is not something to be proud of or something that should be pursued when in reality there are a lot of issues that sex tech can solve. Furthermore, a lot of individuals like to let their imagination get in the way of the facts when they hear the word ‘sex tech.’ I wanted to make sex tech more accessible and digestible to those who are in tech or have preconceived notions about what sex tech is. The media really likes to clickbait sex tech as a sector only focused on sex robots and VR porn — stuff that typically caters to the male gaze. But it is so much more than that. I iterated on the idea of what I wanted STS to be for a long time. It started as a meetup group, then became a hackathon, then a workshop, then something else, before I decided on the publication. It felt like the way I could make the most impact.

“I wanted to make sex tech more accessible and digestible to those who are in tech or have preconceived notions about what sex tech is.”

Sex tech is a very broad field. How would you define the term sex tech? What do you need to turn an “ordinary” sex toy into a sex tech product?
Sex tech is any type of technology that disrupts human sexuality in some way. Sex tech intersects with a lot of other segments of technology that many people may not be aware of initially. Some examples would be ed tech (sex education), fintech (payment processors), health tech (sexual health and wellness), and more.
I believe any sex toy, whether it has circuit boards and vibrating motors or not, can be considered sex tech if advancements in some type of STEM field were involved. Products can be created with 3D printers, which is a type of technology advancement even though the product itself may not necessarily have a technological look or feel, just as an example.

What topics are covered in the magazine?
Each issue has a theme so that readers can have a high level of understanding of a specific subject in the sex tech industry. The first issue is a basic intro to sex tech — what it is and is not, a few people pioneering the way to help make sex tech more mainstream, and why sex tech is so important. The second issue is about sex toy engineering, the third is cybersecurity, and the most recent is on the impacts of SESTA/FOSTA litigation in regards to technical ethics, sex education, consensual sex work and human trafficking.

Could you tell us a bit more about the contributors for the articles? Could anybody contact you if they have something interesting to tell about the topic?
The contributors come from everywhere. They are friends, people I’ve met online, people I’ve come across on a podcast or on Youtube and have reached out to, people who have reached out to me, etc. I welcome anyone to pay attention to our social media for when we announce the next theme and contribute if they feel it resonates with their work, research, or lifestyle in some way.

Is Sex Tech Space a commercial project or is your aim to spread the message about sex tech and connect the people involved?
It currently exists to spread awareness and eliminate the stigma around how we perceive sex as a society. My goal with the publication is to create by-products of eliminating the professional risk that some believe is attached to innovating in this space, eliminate developer bias, and allow more bright minds to come forward and create solutions for things like sexual abuse, inclusive sexual health and wellness, sex work bias, pleasure accessibility, better sex education, etc.

Sex tech is still a niche within the erotic market, even though it is growing. How do you envision the future of this part of the market?
I think this part of the market will be mainstream sooner than we think. Evidence of this exists already with media companies like VICE, Netflix, Refinery29, TechCrunch and others taking initiatives to give spotlight to founders in this space.
It’s also apparent that younger generations are part of a sexual revolution that’s occurring. Individuals are taking pride in their sexuality and fighting to remove stigmas associated with how we address sex in social settings. It’s really cool and very inspiring to watch people no longer feel shamed and organise these movements validating topics that have been considered taboo for so long. When you become unapologetic about your sexuality you give permission to others in proximity to be unapologetic about it too. In turn it creates this snowball effect that scales from individual to friends and family to social network and so on.

Is there a technology or idea that really has impressed you in the recent past?
Being a developer myself, I really appreciate the work Kyle Machulis has been doing to create new C#/JavaScript programming frameworks dedicated to making sex toys and pleasure more accessible to marginalised communities. The best part is you don’t need to have development experience to utilise the tools he’s created. I also really like the work of Sarah Petkus – a roboticist who has created these pieces that use the measurement of pleasure as an input and have some type of physical response as an output. Sarah’s work, which is called SHE BON, proves that not all toys have to exist in some type of phallic shape.

What are your plans for the future of Sex Tech Space?
Because I am currently based in Pittsburgh, I think the city has an opportunity and a lot of potential to be a leader in sex tech as it currently intersects and exists as not only a national tech hub but as a national healthcare hub as well. I hope to facilitate putting Pittsburgh on the map for innovation involving inclusive sexual health and wellness. Beyond that, the Sex Tech Space platform currently has an event page that anyone can post their events to advertise for free and I have been building a job board which will be introduced soon.