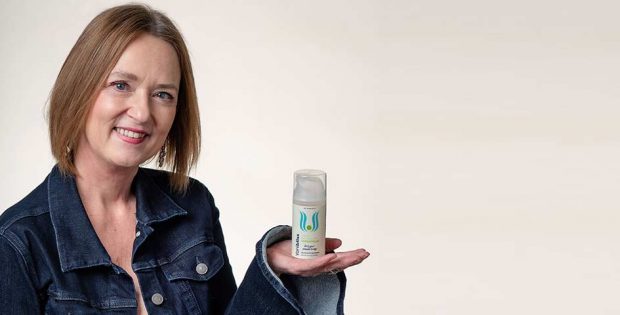 Homeopathy is based on the idea that “like cures like.” To that end, substances similar to those causing ailments are diluted to the point where they are hardly traceable. And while this school of thought does have its critics, it is as popular as ever. YoniBliss also includes homeopathic ingredients, but there is much more to this new lubricant, as we learn in our interview with its inventor, Michele Brookhaus.

Michele, before we talk more about your lubricant, YoniBliss, and the philosophy of your product, could you introduce yourself to our readers?
Michele Brookhaus: I am a woman who doesn’t like to be defined or boxed in. I have this belief that ageism defines us in ways that we are not even aware of. And I like breaking through the beliefs that get in my way. This isn’t always easy because we aren’t always aware of the environment that we are swimming in. But I have always been one to question my own limitations.

When I was in college, I wrote a paper on life extension, and as I look at myself now it’s still that same interest. Not extending life for its own sake, but extending it for the life it brings, for the juicy yumminess of it.
I worked through an auto immune disease and sexual trauma in my body, and while those are stories on their own, that process helped to form who I am. My experiences have influenced my interest in both the body and how it heals as well as how our thinking affects everything, including our health.

I started studying homeopathy over 25 years ago after receiving help for chronic sinus infections and Hashimoto’s thyroiditis. During that same timeframe, my son had an adverse reaction to his vaccine and that instigated my desire to know more. I have been in practice for over 20 years. It’s been an inspiring journey. My clientele is primarily women, whom I love working with, and they have been my inspiration in the creation of YoniBliss.

Women’s hormones, sex, and sexuality are big topics. I share this interest with women as we go through the different seasons of our lives. I believe that post-menopausal women are truly coming into the powerhouse years of their lives. And why wouldn’t I? I am there too.

My impetus was three-fold really. Make a lubricant that was easy to buy for women. Traditionally there are women who are too embarrassed or just simply won’t go into a sex shop. Second, make a lubricant that has simple ingredients and is clean (meaning not a lot of harmful preservatives.) And thirdly, because I am a homeopath, I added a couple of homeopathic ingredients that can contribute to the health and vitality of the vagina, as well as symptoms from aging. This lubricant is also slightly acidic to compliment a healthy vagina. Many people are not aware that a healthy vagina should be slightly acidic, and I desired this to be as much of a tonic as it is a lubricant. Back when Yoni Bliss came out, I think I was the only lubricant on the market that was pH balanced for the vagina. I am seeing more companies taking that aspect on. Yoni Bliss isn’t really a lubricant in the traditional sense. It’s more of a tonic. A healing gel.

Yonibliss is a lubricant that is homeopathic. Could you elaborate on this?
This is a great question because it may be the only lubricant on the market that is homeopathic. Homeopathy is a system based on micro-doses of a substance that when administered to a person based on the principle of “like cures like” can stimulate the body back into balance again.

There are two homeopathic ingredients in this lubricant. One is Chamomile, which most people have heard of. Traditionally it is utilised as a tea or as a remedy for kids who are teething. It has a calming effect. The nervous system gets irritated. The person is irritated. It has this sensitivity. “Don’t touch me.” And Chamomile soothes this. So it’s a remedy that can help with this. The other remedy is Natrum Muriaticum which is actually salt. And again, it’s a micro-dose. It’s not noticeable to the senses. The body recognises it though. If you think about salt, we know that salt can make the body retain fluid. So the remedy is utilised for water tissue balance. In homeopathy, Natrum Muriaticum is considered a grief remedy. Retained grief, to be specific. And in the work that I do with women, I can say that empirically, many of us hold grief in our bodies. And when we are holding on to grief, we are not often open to sexually expressing ourselves, and opening up to another. Natrum Muriaticum addresses that.

How did you come up with the idea of creating this lubricant?
The funny thing is, I came up with the idea for the lubricant not when I, so-called, “needed it”. Nor was I necessarily being asked about it in my practice. I was actually in a really fun and passionate sexual relationship. I was almost 50. One morning I woke up to a flash of inspiration. Who knows where these ideas come from? God-Buddha-Allah-Universe sometimes just drops something in your lap. And I kind of went with it. Even though I knew nothing about what it might take to bring something like this into the market. I just kept taking the next step forward. I still feel like that is what I am doing. Just taking the next step.

It actually took a couple of years to get it on the market. I played around in my kitchen with the ingredients and handed it out to friends and family to try. Do you know how many people have asked me if I have seen “Grace and Frankie”? Yoni Bliss arrived on the market in 2012. I was possibly riding the wave of other healthy lubricants being created at that time.

How would you describe the target audience for Yonibliss?
This lubricant is for any woman. But more particularly for menopausal women. Women in their 40’s to 80’s who value sexual expression. Women who have hormonal shifts due to pregnancy, menopause, cancer or surgeries that leave tissues dry and irritated. Women with pain and discomfort in any way are encouraged to use it daily for 2 – 3 weeks and then intermittently as needed. It can also be used during intercourse or toy play. I have feedback from women with no real “problems” tell me that it plumps up their tissues and that sex feels amazing when they use it. But we are all different and it depends on what your body needs.

Besides your lubricant, you are also offering consultations or coaching sessions. What are you teaching in those sessions and what can your clients look forward to when they book one?
I do. Technology is amazing. I do homeopathic consultations and coaching mostly over the phone or video these days. As a classical Homeopath I find remedies for women to alleviate symptoms that come up in the body. Headaches, pain, hot flashes, anxiety, desire. These are all things that can be dealt with in homeopathy. Sometimes women need to talk about desire and libido and cultivate some strategies. Or they have past sexual trauma that needs to be talked about and integrated.

I have an interesting point of view that we need to claim our sexuality as women. That our lives are more fulfilling and yummy if we express from there. We have, however, fears or symptoms, or thinking that gets in the way of that. And here in the United States, it seems women carry a lot more shame and trauma in their bodies. And if the #metoo movement has indeed gone global, it’s likely everywhere to one degree or another. There are studies that show talking about what is going on in our bodies or in our emotions around desire and sex can stimulate sexual function and increase it by as much as 30%. I want to be part of that solution. And so, I offer individual sessions and an online course and, coming soon, retreats. All of these are aimed at women cultivating a positive attitude around what feels good.

How important is the mental attitude towards sexuality when it comes to a fulfilled sex life and which role could or should helpers like lubricants or sex toys play in this regard?
Wow, yes. Mental attitude is key. If your head isn’t in the game, then certainly your body is not going to be in the game. I am a fan of whatever it takes to get there. Lubricants and sex toys are incredibly important in this regard. For some women giving themselves permission to “go there” because of programming and outdated beliefs can be a barrier. And actually, there are still lots of men out there who don’t help the cause because of their own outdated belief that women shouldn’t “need” a lubricant. They think that if I am doing my “job”, everything works out. This fixed point of view brings up a quagmire of shame for both men and women. And shame is the enemy here. Doing whatever it takes to let go of shame and outdated beliefs definitely helps with having a fulfilling sex life.

Where can retailers turn to if they want to offer your product in their shops?
If you are a retailer desiring this product, just contact me. I am still pretty small, and making a call connects you directly with me.

Are you working with distributors? What can you tell us about your plans for the future of Yonibliss?
I don’t currently work with any distributors. And it’s funny that you ask about the future. In some ways, I feel that my start in the States has been a slow one. When I began, I understood that homeopathy is received more generously globally. I actually have seen it doing better out in that market place than it has here on the homefront. Presently we are working on its acceptance in Canada. And I am quite sure other countries will follow.