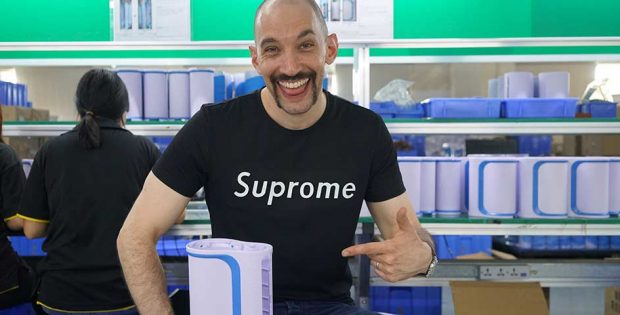 As with your previous products, you put Autoblow A.I. on crowdfunding platform Indiegogo. What aspects convinced your backers to fund the product?
Brian Sloan: First, crowdfunding is not always about funding. In our case, we did not need funds from the crowd to finish the product, but we did want to offer our core community a heavy discount for pre-purchasing the device. We didn’t need to convince them; the new Autoblow’s features are exactly what they’ve been asking us for over the past couple of years. As there are more than 250,000 users of Autoblow 2 in the world, the news spread quickly that we created a new and better device. They wanted more variety in actions, they wanted more realism, they wanted a higher quality sleeve, and a reduction in noise.

We delivered them exactly the improvements they wanted and they were then willing to trust us by pre-purchasing on Indiegogo. The fact that several of the improvements were a result of using artificial intelligence made backing it even more enticing for many men.

Autoblow A.I. marks the third version of Autoblow on the market. What role did feedback to your earlier products play in the creation of this toy?
Feedback from customers is the primary guidance for all of our research and development efforts. I’ve personally exchanged thousands of emails with Autoblow users from all over the world and I briefed our engineers with their concerns. Our product development is completely feedback based. I improve what our customers ask me to improve and leave everything else alone.

You’ve provided your supporters with regular updates on the production, taken them through the whole process, openly communicated about obstacles, and now, you are going to present short film. Why all this effort?
Our company doesn’t release 500 recycled items a year and push them on retailers and distributors. We focus on being the best in our niche – the blowjob machine – or more broadly the automatic male sex toy. I believe it’s important for running a long-term business to emotionally connect with my core customers and to tell my personal story and my brand’s story. Our style of communication is not inexpensive and it is not easy but I believe it is the best way to build and maintain good relationships with Autoblow owners.

A couple of years ago, it seemed that a renaissance for male sex toys was coming. Many established companies started new brands for a male audience. Today, the enthusiasm in this regard has slowed down. Are men a difficult target group for sex toys? Or are they perhaps too simple?
You are right that many established companies started new brands for men. But they forgot that the time of recycling 1980’s ideas in new packaging has passed. New (good) products for men take years of development and cost hundreds of thousands or even millions of dollars for research and development. I think very few firms have the stomach for a development process that doesn’t involve direct copying.

Many start-ups in the industry are dedicated to female pleasure and most stores have a predominantly female clientele. What would be necessary to create a balance here?
I don’t think there needs to be a balance between men’s and women’s products. If there are more female products than men’s products, it is due to the ‘invisible hand’ of the market. I can’t change market forces nor will I try. I can only focus on making better devices for men.

Autoblow A.I. has a MRSP of 230€. Compared with your ‘average sex toy’ this is quite expensive. Why do you think that men are willing to invest this much?
I fight the idea with stores and distributors that 200 Euros is a magic number and that selling beyond 200 Euros is very risky. Simply put, there have not been many products SO FAR that men find worth more than 200 Euros but I am confident men will understand the quality and functionality of the Autoblow A.I. warrants the price we ask for it.
It isn’t reasonable to pay 190 for something that works poorly but not be willing to pay 220 or even 300 for something that works well.

Who can retailers turn to when they want to sell the new Autoblow in their stores? Do you work with wholesalers in Europe?
We currently work with ORION, Eropartner, and Rimba. We may work with other distributors in the future. Retailers can reach out to their current distributor and ask them to reach out to us.

When can the new Autoblow be ordered and when can the trade expect delivery?
Autoblow A.I. will be on display at eroFame in October 2019 and retailers can place orders there at the show with the distributors that stock it.