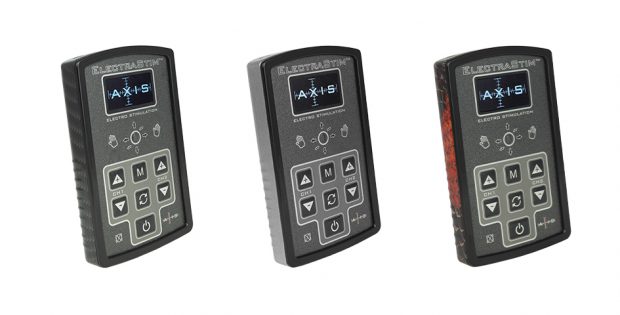 With the success of their recently launched Special Edition Camouflage Electraloops; ElectraStim have once again returned to the hydro-dipping tank to create three Collector’s Edition AXIS designs. As their 20th year of business reaches the halfway mark, ElectraStim are proud to offer something a little different this time!

“It’s the same fantastic AXIS stimulator, but we’ve played with three different patterns to give the units a bit of a visual boost for our anniversary. Each ABS plastic case is hand-dipped using a special water-transfer design process that leaves a lush shiny finish and a unique pattern on every unit, especially Red Boa snakeskin where no two units will look the same. We’ve also changed the outer bezel to a gloss black that makes these designs pop even more.” said Marketing Manager Claire.

“ElectraStim’s 20th anniversary feels like the perfect time for us to experiment a little more and put some of our wackier ideas out there to the consumer. The final three designs were chosen with the help of some of our longest standing customers and we’ve had a lot of fun trying out different patterns.”

In another change suggested by a trusted stockist, the ‘Brushed Steel’ version of AXIS has been modified internally to be heavier than a standard AXIS (65g extra to be exact) to give it some pleasing heft during use and a weightiness that will feel at home in the extensive collections of experienced electro-enthusiasts.

Stock of all three case designs is limited and they won’t be restocked.

Tags:Electrosex
Back to Front Page