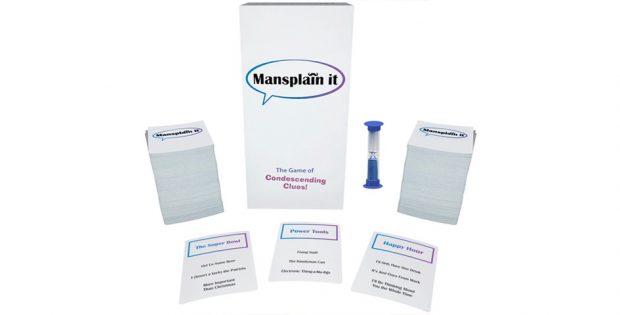 ‘Mansplain it…’ is a party game for 4 or more players that is played somewhat like other ‘guess the answer’ type of games. On each card though, there are three clues that you must give first, to get your team to correctly guess the item or phrase in the box. The clues are all meant to be condescending as if you are mansplaining to your team. Then if they don’t get it with the clues, you can either pass or choose to keep giving clues. You cannot say a word that is part of the item or phrase in the box though.

An example of a Mansplain it card is the phrase ‘Pitching a Tent’. To Mansplain it to your team, you give the first three clues in order, until your team correctly guesses the phrase (or give more clues after if they don’t). In this example, clues are ‘Men do this in the wilderness, but also in their pants’, ‘It’s a slang term for an erection’, and ‘It’s called this because the man’s pants look like what people sleep in while camping’.

“After so many years and so much repetitiousness in the party game industry, we feel like we truly hit on a new concept with Mansplain it.” explains CEO Brian Pellham. “Mansplaining is where I talk down to you like you don’t understand how a party game works. It is where you must give clues on the cards first to get your team to guess the action or item in the box. There, I just mansplained Mansplain it to you..”