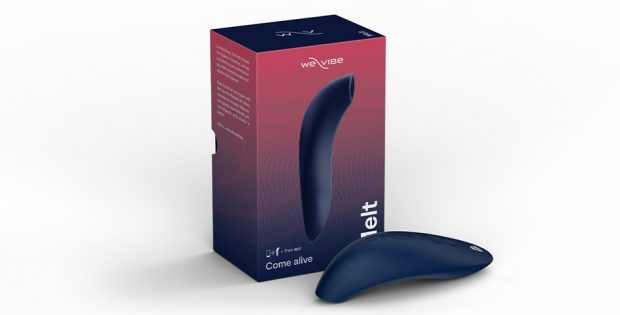 We-Vibe has been the first to launch a connected and contactless clitorial stimulator specifically designed for couples: We-Vibe Melt. Featuring patented Pleasure Air Technology and remote control via the We-Connect mobile app, Melt is already a favorite in the We-Vibe portfolio. Now the sex toy has been given a new colour – Midnight Blue – as well as a travel lock so it can be taken anywhere.

What are the reasons for this gap? Half of the vulva owners report needing additional clitoral stimulation to reach orgasm during penetrative sex (23.7% need it ‘every time’ and 24.8% need it at least 75% of the time).

We-Vibe Melt was created to offer additional clitoral stimulation for vulva owners during intercourse. The slim and ergonomic design make it easy to slip it between two partners during sex – possible in multiple positions. Featuring patented Pleasure Air Technology4, Melt stimulates the sensitive nerve endings of the clitoris with pulsating air waves and gentle suction.

“It is well-known than men orgasm more often and quicker than women during intercourse. With Melt, both partners can reach climax while having sex! Thanks to the Pleasure Air Technology, women can take control and reach a powerful orgasm by playing with the different intensity levels of the toy,” explains Johanna Rief, Head of Sexual Empowerment at We-Vibe.

Tags:Vibrator
Back to Front Page