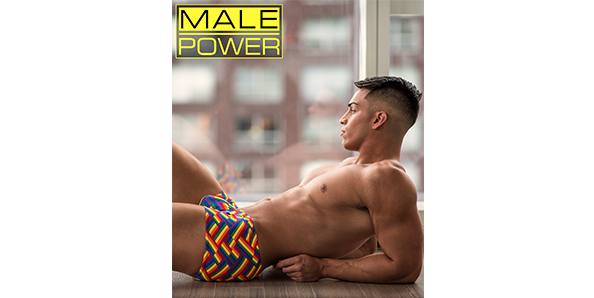 Male Power is proud to support Gay Pride. The Hauppauge, New York company is a pioneer in the men’s exotic lingerie industry, having catered to the fashion forward male since 1974.

Throughout the year, Male Power is celebrating with its valued customers by participating in special events around the country, including parades, fashion shows and after hours parties. Their giveaways at these festivities include top-selling undergarments and colorful posters and flyers.

As a special tribute, the company recently introduced its Pride Fest collection, a polyester spandex fabric offered in a colorful rainbow print. The herringbone patterned Mini Short, Tank Top, Bong Thong and Jock debuted at the Altitude Intimate Show in Las Vegas in April, and will be featured at the upcoming ANME Show in Burbank this month.

The timely delivery of the Pride Fest collection in the spring enabled Male Power’s customers to order and showcase the product in major cities. It has become enormously popular, and embodies the vibrancy and bold spirit of gay communities everywhere.

Male Power and Gay Pride stand together in solidarity and style!