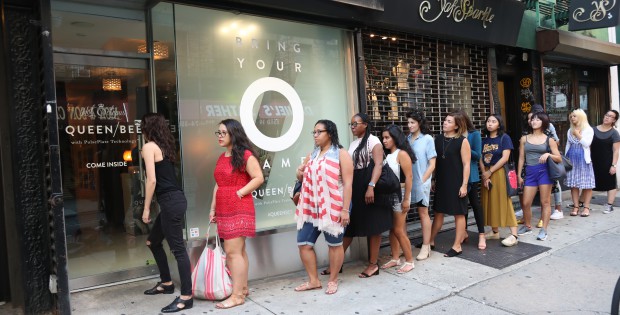 With at least 15% of women reporting difficulty achieving an orgasm (according to Kristine Thomason’s article ‘Never Had an Orgasm? Your’re Not Alone – Here’s What To Do’ published in the Health Magazine) and many women feeling dissatisfied with the orgasms they do have, award-winning sex toy brand Hot Octopuss is inviting female New Yorkers to “bring their O Game” and give their orgasm a makeover.

Their Lower East Side pop-up, dubbed “The Changing Room,” signed up more than 1,000 subscribers in two days after it was announced last week. Visitors started queueing round the block this morning from 9am for a session with sex therapist and orgasm stylist Diana Barone, followed by the chance to “try on” a new orgasm with Hot Octopuss’s cutting edge new product, the Queen Bee.

The Queen Bee is the brand’s very first, hotly anticipated women’s sex toy, using powerful oscillating technology that has never before been seen in the female sex toy industry and promises women an entirely new kind of orgasm. The patented PulsePlate technology was first used by Hot Octopuss in the PULSE, aka the “world’s first Guybrator,” that has become one of the globe’s leading male sex toys since launch in 2013.

Diana Barone, Orgasm Stylist at The Changing Room and noted sexpert, said: “It’s time we embrace the ‘O’ word and realize that like the clothes we wear, the food we eat or any element of our daily lives, orgasms matter to our confidence, happiness and quality of life. Every woman’s orgasm is different, and every woman can have different orgasms – but all too often stigma and taboo infringe on our ability to discuss and discover new things. I frequently hear from women who are dissatisfied with their orgasm, have difficulty experimenting or have never even orgasmed at all.”

After their one-to-one consultation with Barone, guests will be invited to “try on” their new climax in the store’s private, comfortable changing rooms, giving The Queen Bee a test drive in the process. They can then take the toy, which retails at $149, away for free. Barone added: “The Queen Bee is a unique kind of stimulation – using high-amplitude oscillations rather than the typical low amplitude vibrations most commonly found in other women’s vibrators. In my opinion it could change some women’s lives.

Inspired by the unforeseen levels of demand from New York women for The Changing Room, Hot Octopuss is already planning to bring the orgasm pop-up to more cities across the US, including Los Angeles, San Francisco and Chicago.
Adam Lewis, Hot Octopuss’s co-founder and designer of the Queen Bee, said:

He added: “The Queen Bee isn’t an evolution of existing women’s sex toy technology – no woman has ever felt anything like this from a toy before. It’s a new level of power, pleasure and versatility. The technology involved means the Queen Bee is not just another sex toy in your bedroom drawer; you’re getting an entire new wardrobe of orgasms.”