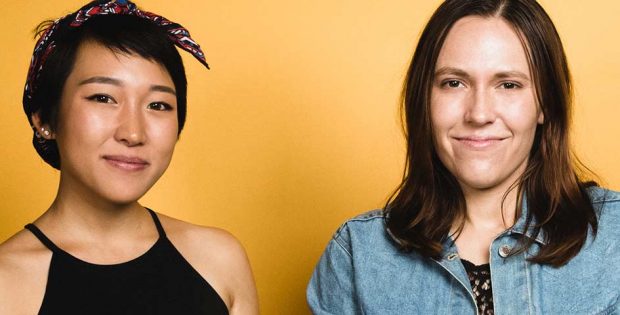 Seeing your arousal and orgasm as “just a chart” can make a subject that once may have seemed nebulous more tangible and approachable. You can start visually correlating your experience with what the app displays. At its most basic, you can start to recognise what it looks like when your experience is good, and when it’s not so good.

For folks who are more creative or data savvy, we’ve seen people use their own data for projects we never would’ve thought imaginable — one pop star used her own orgasm data to create music!

Before we talk more about your product, could you tell us about the team behind Lioness?
Our team at Lioness includes sexual health experts, data scientists, and engineers who’ve worked at Google X (where the automated cars and futuristic products come out of Google) and Amazon Lab126 (where Kindles and all Amazon products are created). Anna Lee, VP of Engineering who worked at Lab126, worked on Kindle prototypes and created the first Amazon Dash Button Prototype. James Wang, CTO, worked at X and Bridgewater Associates, the world’s largest hedge fund and has dealt with everything from launching new initiatives to handling data and privacy for some of the world’s largest and powerful entities. And I started my career in art and finance — my focus in art was around gender and sexuality — and I ended up getting into selling sex toys while teaching myself CAD (3d modelling) to create the first early prototypes what would ultimately become Lioness.

Lioness is part of Stanford University StartX and the University of California, Berkeley entrepreneurship programs. Our mission is to destigmatise pleasure and provide individualised, data-driven resources to increase knowledge about sexual experiences.

It’s similar to what a sex therapist may recommend if you have questions about sex — if you start recording your experiences, you can see how things change over time and in different circumstances. But one of the challenges with that is that it’s not like most people can reliably measure their physiological responses, and also, it’s often just not sexy or something that’s easy to do. Lioness is able to track the subtle patterns from your body so you can notice things that may have been difficult to spot in the moment or over several sessions across a longer period of time.

Can you give us an example of how the recorded data or its interpretation can help the user learn something new about their sexuality?
One of the more surprising cases was when one user was able to see the change in her sexual response before and after a concussion. The change for her was so stark that she actually thought her vibrator was broken. We checked everything from the software to the device itself, and no, the product wasn’t broken, but she had experienced through a brain injury that affected her experience of pleasure in a very visceral way and the timing fit with when the data changed. Especially since she was young and a professional athlete, she had wanted to get back to work, but seeing the data actually encouraged her to rest a bit longer.

Another example — we recently finished a project with Eaze, a large cannabis and CBD delivery service in the United States, and a group of Lioness users who volunteered to try different cannabis and CBD products to compare how their pleasure changed depending on the products they tried. You can see the data report on eaze.com of our findings, but basically, we were able to measure physiologically how THC and CBD can change your pleasure.

Of course, for other people, they might not be experiencing a concussion or want/have access to CBD and THC, but they might be experiencing other things in their lives such as different health issues, taking new medications or substances, stress, hormonal changes, etc. that could change their experience of pleasure in different ways. Or they might be having questions about pleasure with a partner and the data can help reframe the topic and make sex easier to talk about in certain circumstances. Or someone may just be fascinated by data and want to experiment. There are a lot of ways that people can engage with Lioness depending on their curiosities and interests.

How would you describe the target group for Lioness?
Often it’s people going through different life changes — whether it’s becoming an adult and establishing yourself in your career, or you’re at the height of your career and have the time and head space to focus on your pleasure—especially if you might be going through different changes such as menopause or other relationship changes.

Also, we tend to find that people who like Lioness tend who to be pretty experimental and are curious to get more information about how their own bodies work, so they can learn what works for them and craft a better pleasure experience by themselves and with a partner.

The data recorded is highly sensitive for the user. Where is this data stored and which measures to do you take to protect it?
There’s a lot of technical specifics, but it’s important to understand our fundamental principles on security and privacy, which guide what we do on an implementation and day-to-day level.
First off, actually abide by best practices. A shockingly large number of breaches, including the most visible ones, are just from bad security policies that violate recommendations that have been around for decades. We are meticulous about following these practices.

Secondly, the most secure data is that which you don’t have. We recognise that having data is both powerful, but also a liability/danger. We collect the minimum necessary to provide value to our users that they clearly can see.

Finally, thinking about security is always about contingencies and defense in depth. We assume from day one that data can be breached. If so, how do you make it as useless as possible for an attacker? One of the measures we take is we actually fully anonymise and hash usernames even in our database itself. That means, even if someone hacks our database (past many of the measures we have) they still can’t figure out who is who—because even we can’t do that, based on how we’ve set up our systems.

As a whole, our approach has been lauded by the Mozilla Foundation on their report for IoT devices, and said Lioness is an example of “privacy and security very seriously and are a model of doing things right.” As a result of both the report and our general approach, we’ve actually advised different companies in multiple sectors as well how to best handle data in a thoughtful way.

After setting up for the event, Liz, CEO of Lioness received a cryptic request to take down her product display through various intermediaries. Liz insisted on talking to the decision-maker and was eventually pulled to a back room for hours before speaking with the decision-maker, a senior director at Samsung.

The senior director at Samsung stated that “You shouldn’t even be here,” because it wasn’t “women’s health” or a wearable. In the context of the event, it was clear that the only legitimate women’s health startups dealt with fertility—a narrow definition of women’s health that continues to stigmatise a broad array of topics and contributes to stifling innovations around the topic.

The “official” reason you’ve been told was that “someone higher up was not okay with it” and that your product isn’t related to women’s health in the eyes of Samsung representatives. How do you counter such allegations? Does it make any sense at all to engage in such an argumentation?
Yes, because this is women’s health, and we just went through an entire cultural moment with Lora DiCarlo where public opinion sided with this being women’s health.

This kind of bias—especially where sexual wellness is health (unquestionably) for men, but not for women (where it is seen as lewd)—is incredibly damaging to society. It affects everything from how often women are able to frankly talk to medical professionals about problems related to their sexual health, what kinds of products are made and how they’re marketed, all the way down to the comfort that women have in natural functions of their own bodies. It is critical to be able to discuss it and show that not only cultural forces are shifting, but it’s wrong to continue to have these double standards.

There have been similar cases in the recent past, with sex tech companies that primarily target women being affected by such exclusions. In your opinion, does this have to do with the fact that the policies of the big companies / event organisers have changed? Or is it more noticeably now because female-led sex tech companies are taking their rightful place in public?
I think it’s a mix of both, companies changing their policies towards sex-related products and companies as well as more prominent voices from women-led sex tech companies calling out these changes.

And then you have companies like Lioness, Lora DiCarlo, Dame, Unbound, and others calling out the hypocrisy of these policies. How are companies like Hims, who sell sexual wellness and erectile dysfunction drugs, able to sell on mainstream platforms like Facebook, when only a short while before, pharmaceutical products were banned on Facebook? It doesn’t add up — both in terms of how these policies changed to why pleasure and health are treated differently based on gender in the first place.

Do you think there will be a change in thinking in the near future? Or do we have to prepare for a long fight?
Who knows. I wouldn’t hold hope that any large change would happen overnight, given how slow moving large, bureaucratic companies are. But we’re doing our part to try and change things.

Are you planning on working with distributors in Europe? Where can retailers turn to if they want to sell Lioness in their shop?
Yes. To be announced, as we are in different discussions right now with distributors and retailers around the world. If they are interested they can fill out a form at lioness.io/pages/wholesale-sign-up and we’ll be in touch.

What will be the next steps in the development of Lioness?
You’ll have to wait and see!