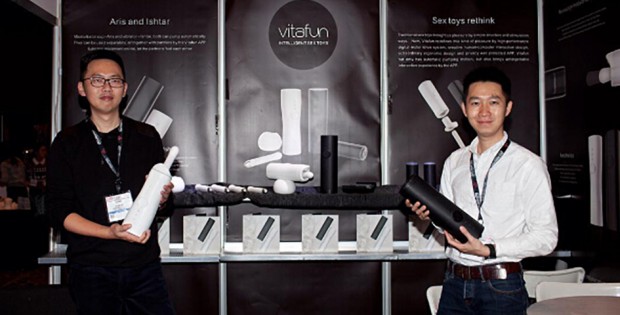 Toys that are controlled via app or can be connected via the internet have become quite common. But of course, the adult market knows no standstill. Things are constantly evolving, and if you want a good example for the industry’s capacity for innovation, look no further than the first two products of Vitafun, Aris and Ishtar. The Chinese company first presented these toys – named after ancient deities – in Las Vegas at the beginning of the year. In our interview, Owen Zheng (on the right side in the picture), the Vice General Manager of Vitafun, shares insights into the workings of these toys and into Vitafun’s marketing strategy for the upcoming months.

Vitafun is a young company based in Shenzeng. Before we talk about your projects, could you tell us a few things about the company? When was Vitafun founded and what’s the philosophy behind the brand?
Owen Zheng: Vitafun was founded in 2014, it is a Shenzhen-based company. The founder, Vincent is a designer. After two years of research and development, the 100% original products of Vitafun were presented to the public at the beginning of 2016. We are committed to providing the best sex toy experience. Simple and healthy, those are our goals.

You are currently preparing the launch of your first products, called Aris and Ishtar. How did you come up with these names and what do they stand for?
Aris means Mars in Greek. In Greek mythology, Aris is the god of war. Ishtar is Babylonian version of Venus – it is the goddess of love and birth in Babylonian and Assyrian mythology. We think there is a connection between these two names and the powerfulness and elegance they embody and our products, so that’s why. 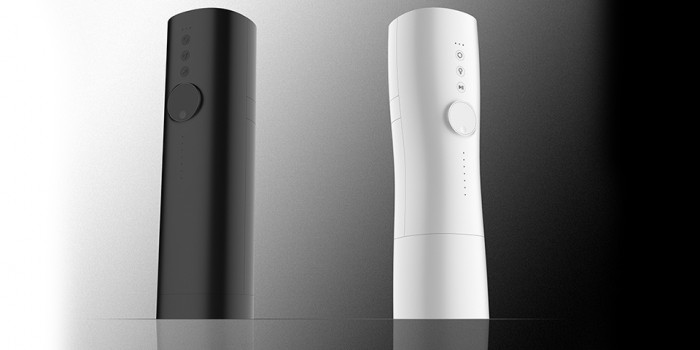 Aris is a product for men that you describe as an „intelligent automatic pumping masturbator cup“. How does it work? How is Aris different from the masturbators your competitors sell?
Firstly, our design with the automatic pumping principle enables Aris to simulate real, human thrust. Basically, your hands are free except for holding the toy, the inside of the cup is perfectly designed for your genitals, and through our app, the toys Aris and Ishtar allow for remote interaction between the partners. All you need to do is to hold it and enjoy it. The way Aris moves, is controlled, and simulates, is completely different from other products. It’s a brand-new sex toy that will deliver a whole new experience, especially when you use it with our app.

Ishtar on the other hand is a product for women, but looks similar to Aris. What kind of product is it? Could you describe how it’s used?
The design concept is similar to Aris, but the inside of Ishtar is a dildo which can move automatically. When you want to use it, just lie own, put it on the special holder with suction cups and enjoy the pleasure. Via Bluetooth, it can be connected with the app on your phone, so the lovers can stimulate each other. Initiative can switch from one to the other, and the movements can be synced.

One of the perks of Aris and Ishtar is their connectability via the app. How do the products interact with the app and with each other? What exactly can be controlled with your app?
If you want to control the toys with your phone as a remote, just connect the two via Bluetooth. The lovers can stimulate each other by syncing the movement. All this can also be done on the toy itself if that suits you – and the same goes for the adjustment of speed, amplitude, and depth. But the biggest innovation is that, with our app, the movement by which you control the toys can be recorded and uploaded to the community. The other users can download and use it on their toys. It allows you to explore joy with a lot of strangers, which is more exciting than what our competitors’ toys offer. We also plan to expand our concept and work with VR/video companies. By providing a programme that syncs with the video, the users can feel the movement of the actress/actor in the video they are watching. 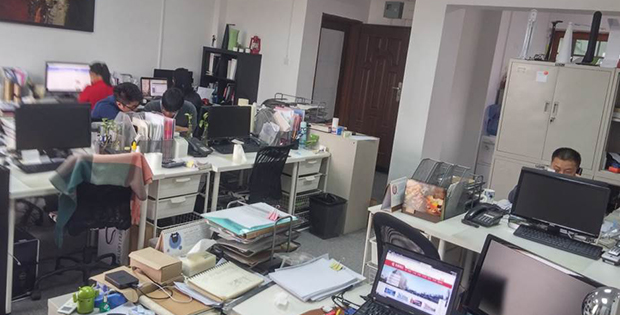 In your opinion, what does the modern consumer look for in a sex toy?
Sex is actually a wide area, and the mystery and freshness keep us fascinated. Traditional sex toys only offer simple simulation, but modern users want more, of course. The combination of sex toys, VR, and the internet will bring much more choices for the users.

Do you think, there is a difference between designing sex toys for customers in your home market in China and sex toys that are made with the European market in mind?
I think that US, EU, and Japan each have their own style when it comes to sex toys, but most of them are made in China. So, basically the sex toy market is a bit messy in China. But the potential in China is unpredictable. Some of the consumers, once they have had their first experience with sex toys, tend to accept traditional sex toys like simple vibrators, masturbators or love eggs. But this is going to change for sure. Just think of how the movie 50 Shades of Grey raised the popularity of SM products, even though the movie wasn’t even shown in cinemas in China.

Recently, we have seen several teledildonics toys that aim to connect users. How do you want to communicate the advantages of your toys and make them stand out on the market?
Most of the remotely controlled sex toys on the market are modifications of traditional toys with added Bluetooth mode and app controls. Basically, you can only control the vibration but not the movement. So when lovers try to interact with it, the movement cannot be synced, and one hand has to hold the phone while the other is moving the toy. Our innovative design makes the product move automatically, and thanks to our app, this movement can be transmitted with great precision to the other toy. So even when apart, the lovers still feel like they are really moving with each other. Our blind control design allows you to put the phone down, just control it via the knob and dial with your eyes closed. 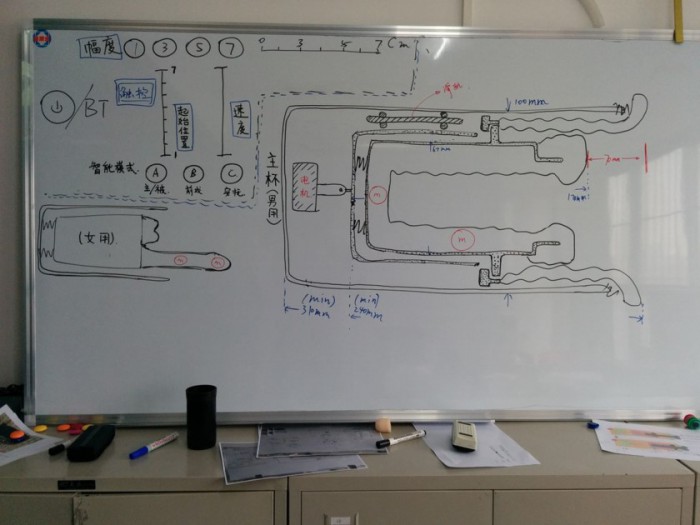 Apps and software are already an important aspect of sex toys today. Do you think that the apps which control the toys will become the most important factor for the quality of a product?
It is a trend to control toys via app, but the most important thing is providing a simpler, a more exciting way for the consumer that never takes him out of the experience.

When will Aris and Ishtar be released? Will they see a day and date launch across markets, and how much will your products cost?
The AVN was our debut show, and we are going to start a campaign on INDIEGOGO by the end of March. I think three months after that, our product will be released worldwide. I promise, the fans can get a very good price on Indiegogo.

Where can European retailers turn to if they are interested in selling Aris or Ishtar in their stores?
We already established contact with some British, German, and Dutch distributors, and apart from online retailers, we also want to reach out to some retail stores and would love to work with them.

Which plans do you have for the time after the release of Aris and Ishtar?
Apart from working on more accessories for Aris and Ishtar, we are planning second generation products. They will be equipped with more sensors, making them a perfect match for the VR devices.