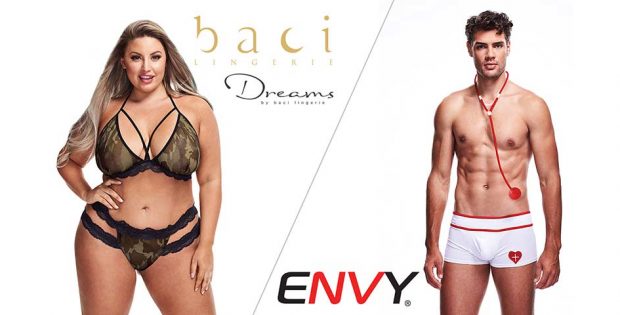 “It has been some time since Baci and Envy have had new costumes released,” said Andy Green, President of Xgen Products. “No matter the time of year, everyone wants to live out their sexy fantasies, and these new styles are more than accommodating.”

Highlighting the new Envy costumes is the Two-Piece Doctor Love Set. This two-piece costume features a low-rise short boxer/brief, designed in the classic white and red, while the matching red stethoscope completes the fantasy. All four costumes are available in two sizes, M/L and L/XL.

The Two-Piece Seduction Troopers Set from Baci Lingerie is a seductive trooper bra and panty set. This strappy lace and camo mesh costume starts with a sheer camo bralette, adorned with curve enhancing straps and a lace ruffle, while the double-banded thong finishes off the look. All three Dreams costumes are available in one-size and queen-size.

Tags:Lingerie
Back to Front Page