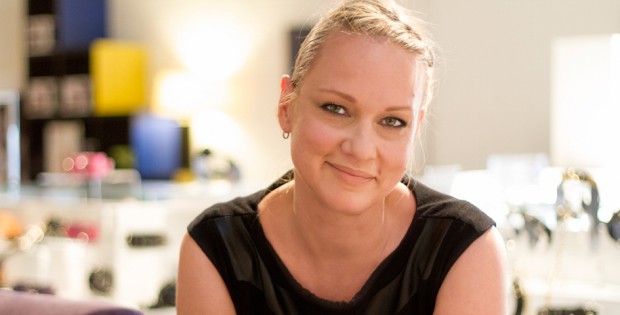 In the past, most management positions in the adult industry were held by men. But like so many things in our industry, that has changed quite drastically over the course of the past years. EAN and Angela Lieben, the Marketing & Public Relations Manager of Liberator, take a closer look at this development that has reshaped the face of the industry.

How did you get involved in the adult industry?
Since I have always been comfortable talking about sexual topics, I thought I would see what it was like to be a phone sex operator. Short lived as that job was, I was intrigued by the situation of encountering — on the phone only — a complete stranger and talking about sex. This experience, which involved sexual fantasising, was not too different from the typical experience I have had throughout my life, of people wanting to tell me their secrets, and feeling comfortable in doing so. Today, I play a role in promoting sexual expression and providing products that enhance that expression as Marketing Manager at Liberator Bedroom Adventure Gear.

What image did you have of the adult market before actually getting into this industry?
My exposure to the adult market began as a teenager with frequent trips to an erotic boutique in Washington, D.C. I would peruse the aisles in search of fun items that would make for titillating discussions with my friends. Over the years, I’ve noticed a significant change in these shops. The bright neon lights and jerk-off booths have made way for a modern and intimate shopping experience. With so many products available, it can often times feel overwhelming. But what I found was everyone has different tastes and proclivities. So the more out there for people to play with, the merrier.

“Right now, I’m seeing women actively involved in changing the perception of an entire industry which was once looked upon as a males-only club.”

When you decided to get into this industry, were you faced with negative preconceptions from the people you know?
Fortunately for me, I have extremely supportive friends and family. My job with Liberator is quite fascinating to them. My husband is the most supportive. His adventurous nature, and my access to incredible sex furniture, always makes for fun on the weekends. We have a great time testing out all of the new products. Plus, my mother is always asking for me advice on the best sexual positions. My more conservative friends aren’t so sure about my career choice. I think they are confused about what my job entails and think that the entire adult industry is related to porn. To break the ice, I sometimes give them a toy or lube. That usually works to turn around any negative perceptions. I believe that most people’s negative reactions is because of the shame associated with sex and desire. A person’s opinion has more to do with them than it does me. I believe that people don’t need to feel shameful about enjoying sex.

For a long time, the adult industry was more or less a boy’s club, but fortunately that has changed. How would you sum up the current situation?
The climate of the adult market is radically shifting with more women taking charge of their own careers. Right now, I’m seeing women actively involved in changing the perception of an entire industry which was once looked upon as a males-only club. Women are inventing exciting new toys, raising money via crowd-funding, running their own speciality boutiques, and talking openly about their exploration and experiences. When female consumers see that women are involved in a company’s overall direction, it builds trusting relationships with both emerging and existing brands.

“We are beginning to see remarkable changes in the way adult products are marketed and advertised as more executive roles are being filled by women.”

How have these changes affected the industry?
We are beginning to see remarkable changes in the way adult products are marketed and advertised as more executive roles are being filled by women. For example, our Creative Director for Liberator, April Harmon, has worked diligently in re-branding our image. In order to appeal to our overwhelming female demographic, she used a diverse group of models and completely changed our photography style to evoke a sense of feminine power. This approach has really been successful and has substantially increased the sales of Liberator Shapes. Through the use of sex-positive imagery, we are essentially giving women permission to take charge of their own pleasure. I’m also seeing other adult product lines changing the way they approach female consumers. I believe that’s mostly due to women being in leadership roles, and it’s heralding a great change in the way our industry is perceived.

Is there an area where the female influence is felt particularly clearly? Sales and distribution? Marketing? Product development?
I am not certain how female influence affects distribution. However, I’m positive, that in order to influence sales and grow a company, the marketing and development of products does require a female perspective, especially if it’s a product that is meant to be used by women. In order to truly deliver quality products women will want to buy, and talk about with her friends, it ought to have a design and packaging that speaks to them. It’s about developing trusting relationships which, in turn, creates a loyal following. Company’s often miss out on this opportunity because they are not employing enough women in leadership roles.

Wouldn’t it seem logical that an industry that caters more and more to women should at least in part also be run by women?
Women understand women. It’s as simple as that. Obviously, some companies are not moving in that direction. Either women are not going for those types of jobs because of the stigma associated with the adult industry, or companies are not willing to embrace a diversified workforce. With a strong female presence at Liberator, we are always thinking about what women would like and enjoy. I love being a part of such a creative team.

“The adult industry offers some amazing opportunities for women, especially behind the scenes.”

Do you see major differences between the adult industry and other industries you know? If so, what is different about it?
The following has been my experience. In the U.S. we can sell virtually anything with nearly naked women implying sex, but cannot run the same type of ad with an actual sex product. It is a double standard. That’s because overt sexuality is not accepted in the U.S. and that seems bizarre to me. Other industries are allowed to be provocative, even if their product has nothing to do with sex. The good news is, sexual wellness is a budding trend within our mainstream culture. As the conversation about sex shifts, I’m certain that will we be seeing well-crafted adult product ads making their way into major magazines very soon.

Do you believe that adult companies recruit enough women for leading positions?
In order to see a change in the industry, women have to lead that change. The adult industry offers some amazing opportunities for women, especially behind the scenes. I constantly read the adult trades and thrilled to see women are being highlighted for their achievements within our industry. As companies move forward in 2016 and beyond, so will their efforts to hire a more females. Striking just the right balance, and creating effective teams which encompass all genders, is an essential part of moving toward a new generation of consumers.