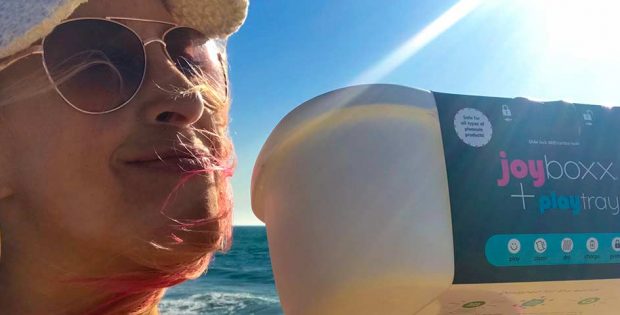 Many companies who want to introduce a new mass product to the market turn to Chinese manufacturing plants to meet their production goals – that is also a common occurrence in the adult industry. And it is also the strategy Passionate Playground pursued at first. Throughout the first years of the US company’s existence, they had their products manufactured in the Middle Kingdom. However, now they have shifted production to their home country. Deborah Semer, CEO of Passionate Playgrounds, assures us that the current political climate had no bearing on this decision. But what were the reasons to take this step then? Deborah tells us in our EAN interview.

Passionate Playground – the company behind Joyboxx – recently decided to move their manufacturing from China to the US. Why did you make this decision?
Deborah Semer: We always wanted Joyboxx to be made in the US, however the initial US tooling and production quotes were too extreme, so we started in China. We finally made the decision to move the tooling after trying several factories in China and they just couldn’t make Joyboxx without a long delay to get it right. Joyboxx is actually a labour-intensive, complex product to make. I did learn about one odd Chinese political issue that stopped manufacturing -they tried to clear air-pollution before a global summit, so they shut down the metal and lock manufacturers (which affected our lock production). These manufacturing delays were then compounded by global shipping issues that exist for everyone such as; Chinese holidays combined with the US holidays, the US Longshoreman strike and mega companies such as Apple that clog all shipping lines with a new release, so you just can’t get your product shipped. Our final overseas container in March was stuck in the port of Vancouver, BC for 2 extra weeks due to “general congestion.”

Did this decision have anything to do with the recent “trade war“ between the US and China?
No. Just very good timing. I also learned that the Chinese seem to love Trump (during the election time), which boggled my mind but they have limited information.

Could you elaborate a bit on the problems you faced while manufacturing overseas?
In addition to the issues stated above, our last company that was producing Joyboxx was actually German-owned, but they were the go-between for the Chinese factory, so I thought it would be of the highest quality. Let me be clear that the Joyboxxes that were made correctly and not damaged in assembly, are perfect and quality of food-grade plastic is the same as in European baby products. Overall there is a just a big difference in general aptitude and attitude about what is acceptable. The aptitude is night and day between skills and technology, from what I’ve seen the Chinese engineers just kind of “wing it” each time during production. The concept of set manufacturing planning and control systems didn’t exist in my experience… even when asked for.

How hard was it for you to find a factory in the US that suits your needs?
Not hard at all! Every factory we met with wanted to make Joyboxx. Our main issue now is with the cost of labour and ground shipping, however it should equal out to about the same or slightly more than having to wait months for China.

Most manufacturers use factories in China because of the lower costs. Will the price of the Joyboxx change or does a lower error-rate actually compensate higher costs?
There are considerations such as printing and cardboard cases that are also more expensive. We have many taxes here in Washington State in addition to a high labour cost. The US makes the most plastic in the world, so the raw materials are cheap. We are also looking at recycled plastic, something that China just stopped using. Overall, we are looking at 2x COGS, but not having errors and the ability for smaller runs/on-demand manufacturing should compensate for that.

Besides this, will anything else change for your customers and the users of Joyboxx?
Not at all. We will still bless each Joyboxx with many years of joy.

“The ability to have complete trust and oversight during manufacturing is worth every penny.”

Joyboxx has been on the market for almost four years by now. How did the brand and the company develop since you first presented your storage box for sex toys?
#1 we received the first utility patent! Joyboxx is now the “standard” in hygienic storage system and it has expanded into the exploding recreational Cannabis market and growing the Build-a-Boxx brand. Build-a-Boxx makes it easy for wholesalers and direct customers to start with the storage and fill it up. It’s been interesting to see almost every retailer and manufacturer try a version of “something in a box” which is just packaging instead of a patented hygienic system.

What kind of feedback did you get from your customers and how did this influence Joyboxx’s development?
We have made several improvements over the years such as a sturdier metal combo lock (which is included free in addition to the removable quiet slide-lock) and more information about how all of the parts work. People still don’t realise the number of problems Joyboxx + Playtray solve for all of the moments of pleasure product use, before, during and after. So we need to keep doing a better job of educating wholesalers and customers.

Will we see a Joyboxx 2 and which kinds of improvement would you love to have in another iteration of the product?
We have an entire product development line just waiting to go. This requires quite a lot of funding and so we are beginning to search for a partner or buyer of the company who has the infrastructure to take Joyboxx to the massive potential we know it has. Every pleasure product sale needs a Joyboxx (or two) and a Playtray to go with it, so the number is in the tens of thousands per day – conservatively.