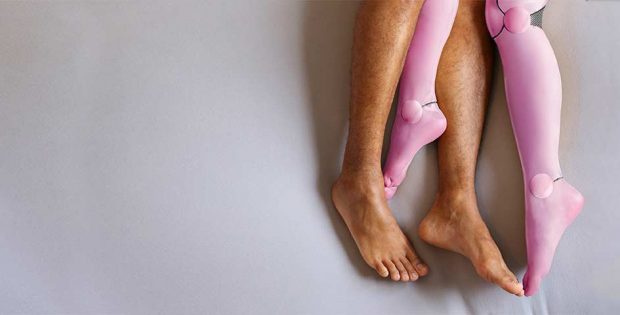 In his monthly column, Brian Gray from Glasgow-based consultancy Lascivious Marketing offers his thoughts on all things marketing…and perhaps one or two other things. This month he plays Devil’s Advocate to the sex robot detractors.

Oscar Wilde famously opined that he could resist everything but temptation. Opinion pieces with questionable arguments have the same effect on me. The British newspaper The Guardian published an article on Monday 25th September written by “robotics expert” Jenny Kleeman, titled “Should we ban sex robots while we have the chance?” The sub-heading posits: “AI sex dolls are on their way, with potentially sinister social consequences. So before they hit the market, we must ask whether they should.”

Kleeman feels the key issue is “…how their existence will affect how human beings interact with each other.” Because these robots have AI, they’re apparently a substitute partner, not just “…a mechanism for giving you an orgasm.” She ponders how men will interact with women “…who have the inconvenience of having their own idiosyncrasies and free will?” She continues: “If you are used to having sex with ultra-life-like humanoids whenever and however you want, will you be more likely to expect complete dominance in your relationships with other humans?”

At the end, Kleeman finally gets to the key point in all of this. “Perhaps the most important question to ask is why there is a market for sex robots in the first place.”

So why indeed would a man buy an adult AI sex robot? As a married man, I can’t imagine comparing a synthetic robot with my other half, for a gamut of reasons. But as Kleeman herself has shied away from proffering any reasons, Yours Truly will dutifully step up to the plate to highlight a few possible factors which could drive demand. Personally, I don’t see any one isolated factor driving a purchase decision, but time will tell. In addition, some of these factors carry more weight than others. One final consideration: these dolls come with a hefty price tag so will not be impulse purchases (marketing graduates reading this can consider the Consumer Processing versus Hedonic Experiential models of consumer decision making).

Before proceeding however, one further point. While the adult retailing world generally comprises open-minded people with lots of common sense, the following may be a shock to ‘snowflakes’ or those viewing the world through rose-tinted glasses. Consider yourself ‘trigger warned’.

Sexual Health: When the World Health Organisation reports in July 2017 that data from nearly 80 countries shows that antibiotic-resistant gonorrhoea is “much harder, and sometimes impossible, to treat,” it’s time to take note. Furthermore, medical professionals refer to a “hidden epidemic” of asymptomatic STIs. Assuming the sex robot hasn’t been hacked and reprogrammed to kill its owner (covered in last month’s column) how much safer can sex be with a germ- or virus-free robot?

Convenience: Sexual fulfilment can be achieved any time, day or night, in sync with hectic lifestyles and/or unsocial work shifts.

Economics: Current divorce rates don’t make for pretty reading. Among men exists a perception (true or not) that they often come off worst financially. When there are serious potential perceived financial consequences down the road even for being a model husband, would a robot be a better financial investment? Furthermore, although discussion of AI sex robots has largely centred on, well, the sex, the concept of human-robot unions – yes, marriage – has been put out there. Predictions of when human-robot marriages may occur have already been made. Dr David Levy, speaking in 2016 at the second International Congress on Love and Sex with Robots, painted a rosy if somewhat surreal picture of how things might be. Marriage guidance counsellors may find themselves jobless.

“By the time there are no laws to prevent human-robot marriages, robots will be patient, kind, protective, loving, trusting, truthful, persevering, respectful, uncomplaining, complimentary, pleasant to talk to, and sharing your sense of humour. And the robots of the future will not be jealous, boastful, arrogant, rude, self-seeking or easily angered, unless of course you want them to be. So when the law allows it, why not marry a robot?”

Put in those rather persuasive terms, for some it could be a compelling argument. Or, conversely, one step too far?

Complicated consent: In the UK recently, new guidelines on sexual consent have been published by the Director of Public Prosecutions, that according to one female barrister “take us well beyond the old saying that “no means no’.” She stated in the Daily Mail newspaper: “In Ms Saunders’ brave new world, a rape suspect may have to show the steps he took to establish that consent was ‘fully and freely given’, which rather inverts that age-old British tradition: innocent until proven guilty.”

As an aside, are we now facing the prospect of signed, witnessed, consent forms being handled before a certain stage of an adult encounter? Or audio visual proof of not only consent but the encounter itself? Do normal consenting adults really want this to become de rigeur for future sexual relations? None of this would be an issue with a robot.

False rape claims: No justification ever exists for rape. It is a despicable act. Consequently, being falsely accused by someone of such a crime is a horrific experience, devastating to the accused, and extremely stigmatising. Thankfully, such claims are relatively rare. But it is no comfort to any individual man falsely accused that he is a victim of a very small and relatively isolated problem. For such victims or those who live in fear of such a scenario ever arising, AI dolls may be perceived as a safer alternative when seeking sexual intimacy.

Less hassle: Many men are downright confused. They’re bombarded with messages about having to be a ‘nice guy’, yet it’s the dominant ‘bad boy’ who fills – and often satisfies – female desires. Read the back cover blurb of hot erotic fiction novels: what’s the common theme regarding the male protagonists? Two neuroscientists took it even further with the advent of ‘big data’: the shocking reality is there for everyone to read in the book ‘A Billion Wicked Thoughts’. Men are repeatedly told not to objectify women, yet thirty minutes of browsing Instagram would make many people believe the application was designed for that sole purpose. And it’s women uploading pictures of themselves who are firmly driving the bus.

In the face of this growing disparity between how men are told they need to behave with women, yet seeing for themselves the exact opposite occurring, potential buyers may well consider robots to be a far less confusing and ambiguous option.

The “un-beautiful” people”: Wouldn’t it be great if the Disney-esque, rom-com narrative about there being someone for everyone was true? Well, it isn’t. Sorry. What about men who for whatever reason(s) can’t find a partner? Perhaps those whose appearance, or “idiosyncrasies and free will” are not ticking the boxes of potential partners. Match.com’s big ad strapline is “love your imperfections”. That’s great: but what if nobody else does? Are such men to be denied the right to experience the closest thing to sexual pleasure with a person if there is an absence of partners?

So, off the bat, that’s seven potential factors that could influence demand for AI sex robots.

Kleeman worries about an AI robot inhabited future. She asks whether the existence of AI robots is going to lead to increased misogyny or (non-consensual) dominance. I think she’s not only looking at this from the wrong angle, but she’s also behind the times. The horse has already bolted.

There are men who have objectively considered relationships and decided they’re not worth pursuing. Psychologist Helen Fisher’s 2013 book “Men on Strike” makes for interesting reading. The following year, the ‘Sexodus’ was brought to our attention: swathes of men giving up on women at early stages of their lives. Japan’s “herbivore” phenomenon also makes for grim reading.

Both marketers and relationship counsellors espouse mutual happiness between both parties: one individual should never be happy at the expense of the other. Just as some men might walk away from a car showroom or hifi store if the products available don’t satisfy his wants or needs, they’re applying the same cost/benefit analysis to male-female relations and subsequently withdrawing from this particular marketplace.

Kleeman and other writers should perhaps be less worried about the perceived (and rather alarmist) risk of increased misogyny from the introduction of AI robots and more concerned about the ire incurred from fellow women. Women who realise men can be masculine without being misogynistic. Women who are increasingly being outright rejected due to the effects of agenda-driven campaigns that appear hell-bent on challenging evolutionary biology.

In fact, we are already seeing such agendas come under scrutiny. “Women vs Feminism: Why We All Need Liberating from the Gender Wars” written by Dr Joanna Williams from the University of Kent highlights a number of issues which have come to dominate modern European culture. These are now being challenged. Furthermore, The Future of Sex website cites some very interesting YouGov research results (coincidentally, conducted at exactly the same time as Kleeman’s article was published) concerning the current attitudes of US adults to sex robots.

Marketers identify objections to products or services and counter these accordingly. Kleeman wonders whether women will suffer from the introduction of AI sex robots. Perhaps she should ask what can be done to improve male-female relations and remove the pain points. The gauntlet for Kleeman et al has been laid down: make the sex robots (or any male-female substitute) a less attractive option. There’s a key caveat however: banning the robots while not changing the existing ‘proposition’ (and its perceived perils and pitfalls) won’t suffice. Potential robot buyers aren’t going to return to the dating pool with renewed smiles and joie de vivre if this is the case.

In conclusion, how should the adult retailing industry react to the furore? Firstly, regarding the big picture, it’s important to keep a sense of perspective. Don’t get swept up by false hysteria or questionable narratives being pushed. Do monitor the sociological and legal environments when it comes to conducting your company PESTEL Analysis, but don’t allow it to distract you from your day to day business operations.

Secondly, this is an industry which is geared towards delivering lots of smiles and other physical sensations. It should therefore lead by example and continue to serve its diverse customer base without prejudice, misogyny or misandry, to the best of its collective ability. With diversity comes inclusion, and if somebody wishes to purchase and use an adult AI sex doll for a number of potentially acceptable reasons, it would be hypocritical to oppose this.

Thirdly, any properly functioning market has a consumer base exercising choice in how they spend their money. For companies who do wish to sell AI sex robots, good luck. Be clear about the positives, highlighting the benefits effectively but sensitively. Identify likely objections and counter them accordingly, calmly and sensibly. Create effective content marketing to inform and educate key audiences. And remember: the market will soon enough decide if you’ll be successful or not.

Finally, on a personal note, I can’t imagine lining up to buy an AI sex robot. Likewise, there are adult products advertised in this very magazine which don’t apply or appeal to me. But ‘live and let live’ is a hard mantra for anyone to fault. And as long as all products are used with the relevant consent and are within the letter of the law, I’ll embrace the market and all its wonderful wares, whether personally consumed or not.

Tags:Opinion, Technology
Back to Front Page